Every self-respecting hipster needs a smattering of culture, so we spent some time in Rome staying near the piazza of Testaccio. Between lovely meals, walked off in the (relatively) cool shade of the Tiber banks, and a daily siesta during the hours of the sun’s anvil, we tried to catch a few galleries. Rome, probably owing to the many of young foreign artists on residencies at the British School, the American Academy, the Swiss Institute, etc., and the not-inconsiderable amount of, probably ill-gotten, money there, has a decent whack of good galleries, and has had so for many years. While Milan, Trentino, and the Veneto may have the lion’s share of wealthy patrons, foundations, and galleries, there are quite a few interesting spaces in Rome, Naples, and increasingly, Sicily.

Anyway, to start with we dropped by Fondazione Giuliani: a lovely space improbably housed in the basement of a large, reasonably attractive early twentieth-century apartment block in Testaccio. It shows specially commissioned projects and collaborations, but also presents the collection of Giovanni and Valeria Giuliani. It was a group show of high-calibre international artists, amongst the standouts of which were Daniel Steegmann Mangrane’s theatrical screens made of coloured metal chain-links. Alexandre Singh’s evocative sculptures alluded to his play The Humans, a riff on Aristophanes. Haris Epaminonda’s floor and wall pieces were placed around the show, and Fischli/Weiss’ seminal film The Way Things Go was riveting. The exhibition was beautifully curated by Adrienne Drake and produced in conjunction with Kunsthallelissabon in Lisbon. 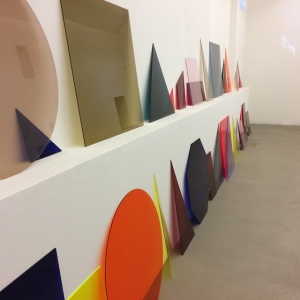 The highlight of the trip was identifying a rather unremarkable deconsecrated church in which NY gallerist Gavin Brown has opened a non-traditional exhibition space, roughly at the same time as his much-better-publicised valedictory show in the West Village, with its re-staging of Jannis Kounellis’ Untitled (12 Horses). Located, un-numbered, on one of the smaller streets in Trastevere, we had to ask a few crones whether they remembered a church in the area, and as we got warmer, we enquired at the neighbourhood stalwart Trattoria Da Enzo. We guessed, correctly, that this would be the place where the gallerist used to lunch, back in 2005 when he first spotted the church, when he ran a gallery in Rome with 2 other gallerists, Franco Noero and Toby Webster. We finally found it, but unfortunately lost the photographs of the inside – but it is very far from the typical ‘white cube’. Essentially it is an austere church, stripped of any baroque decorations it had, and just in front of the altar were a number of pots on portable burners, with what looked like black (marble apparently) sheep skulls and bones in them. On one of the two marble slabs was a well-dressed lady, to all intents and purposes, passed out with a couple bottles of beer next to her. The space was open to visitors, but it wasn’t so comfortable: we seemed to have stepped into an performace and installation of Rirkrit Tiravanija, an Argentine-Thai artist and professor at Columbia. I had one more reason to find his space – I remembered a bar called Passerby that Brown founded. It had a disco-lit floor that I and a coterie of Sicilian artists, in the much more affordable Chelsea of the 1990s, used to colonise. 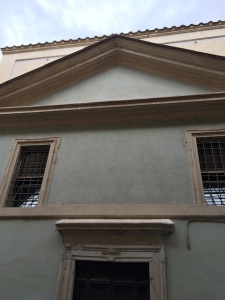 Galeria Indipendenza had a joint show of Charlotte Posenenske and Tauba Auerbach. Auerbach had some rather lovely textured and woven paintings inspired by the architecture and decoration of Rome, which worked beautifully in the the gallery’s elegant rooms. The late Posenenske was represented by gorgeous non-functional ducting: galvanised steel or cardboard sculptures, which were either originals or replicated by Auerbach (Posenenske in her life rejected notions of unique works in an apparently political statement). The sculptures remain highly contemporary, reminiscent as they are of restaurant ducting, high-volume air conditioning (HVAC) ducts, or the cooling equipment found in, say, a server farm.

One thought on “Contemporary Art in Rome Summer 2015”