It’s always fun to see what’s doing in the New York City gallery scene, particularly the great big Chelsea barns on 19-24th street off 10th Avenue.  I’m personallyless keen on either the stuffiness of the Upper East Side galleries, grand as they are, or the acheingly hip but still pretty grim scene in Bushwick.  In any case, there are too many to see, so this is a sampling.

First, Richard Serra at Gagosian – Larry uses his space well: three massive rooms filled with massive structures, that however don’t have the  precarious balance, and associated frisson, of the sculptures at (for instance) Hauser in London. 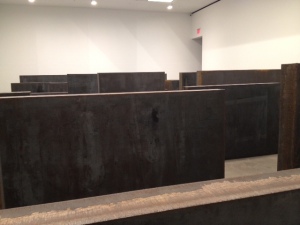 Franz Erhard Walther, in his first showing of new work in NYC in 22 years, at Peter Freeman. 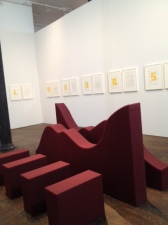 Isa Genzken’s retrospective at MoMA: while I personally preferred her early work to the more recent pieces, one has to admire her ability to successfully juxtapose and assimilate such radically different source material, often taken from that bugbear of our time, popular culture. Her amazing creative bandwidth transmutes what is ostensibly a rag-bag of cultural detritus,  into something potentially great, though it still may be an acquired taste for at least one viewer. 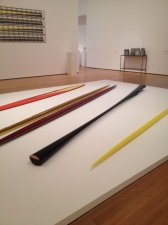 Ad Reinhardt’s lovely, surprising, transcendent black paintings atDavid Zwirner.  It would be easy to walk in and out and dismiss them as monochromes, but these rewarded careful looking as browns, purples, greys, blues, reds all pulsed in and out of the perceptual field.  I didn’t love the cartoons and drawings, in comparison, but there you are… 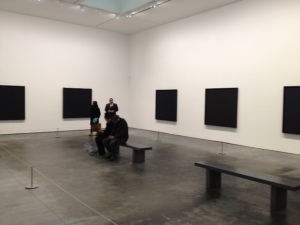 The star for me was Thomas Demand’s Dailies at Matthew Marks.  Similarly to his earlier practice of re-constructing interiors from photographs in news magazines which are then photographed, here he fabricates out of paper scenes based on his own cheap cell-phone photos: theatrical sets of banal scenes.  These are then photographed, and then printed using the dye-transfer process, and obscure and difficult art mastered by, amongst others, William Eggleston.  The result are richly coloured, yet somehow flattened and unreal or surreal; and it doesn’t really matter if one knows the scenes are entirely fabricated.  The effect is almost painterly, in its geometric emphasis, flatness, and abstraction (almost complete evidence of anything personal, dusty, dirty, etc.)  The scenes are still vaguely familiar, any of us could have taken them with our iPhones, but of course they wouldn’t look anything like these.

Cyprien Gaillard fills Gladstone with digger buckets.  The buckets are separated from their context, and it would take more of a specialist in diggers to work out whether these are actually all real buckets (note the funny shaped ones on the right).  The surfaces of the buckets, the teeth, and so forth, are re-worked, cleaned, oiled, soldered, and again it’s hard to establish what is original and what is an artistic intervention.  The pins that would have attached the buckets to the diggers have been replaced by onyx rods.  A presumably expensive production, but mesmerising, at least if you like heavy metal.

Alexandre Singh at Metro Pictures.  These are bronzes of the heads and masks, drawing from Attic theatre and the comedies of Aristophanes, that the chorus of his play The Humans wear. 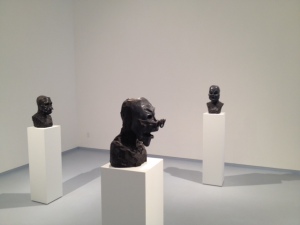 Reinhard Mucha’s show at Luhring Augustine was pretty crazy, with his trademark vitrines that look like cross-sections of insulated windows.  Here he also had an elaborate train-set based sculpture. 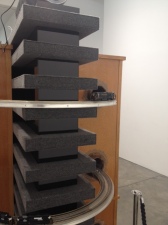 Jacob Kassay’s show at 303 Gallery was okay, if you want to see slightly tired conceptual discussions about deconstructed paintings played out on a gallery wall.  Lots of broken up stretchers, covered with canvas, in non-rectangular shapes, and obscure books with pieces of perspex stuck in them.  Quoting from the PR, “Kassay has reproduced the stretchers initially built to conform to these discards…for entirely new paintings….[he] applies an atomized acrylic paint…the paintings’ surfaces simultaneously condense as solid textures and diffuse into a depth-less fields [sic] of pixels. Oscillating between these dimensional states…”  You get the idea. 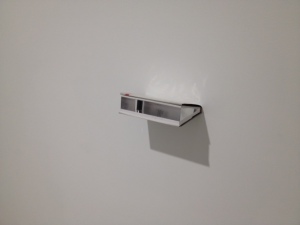 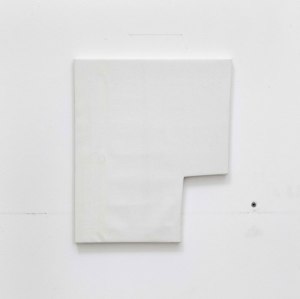 A fine show of Gary Hume at Matthew Marks 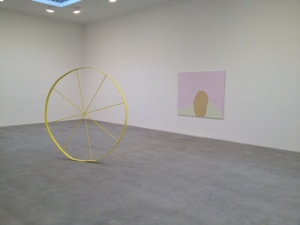 Metro Pictures also had a rather good show by Isaac Julien, about the relationship between money and the art world.  The show was made up of a large film, PLAYTIME, that had beautiful shots of the desert and Iceland; as well as a smaller two-monitor film KAPITAL that actually made Marx a bit less dreary.  There were also a number of large-print photographs.

In Bushwick, Luhring Augustine showed Michelangelo Pistoletto’s earlier work (starting in the 1960s), of considerable breadth when compared to the mirror works that somewhat dominated his 2011 show at MAXXI in Rome.  One of the below wasn’t exhibited at Luhring ! 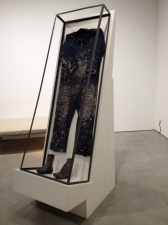 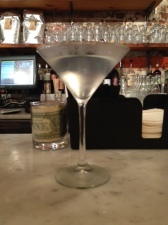 There were upwards of 20 dealers, project spaces, rent-a-spaces, etc. in the Lower East Side, some of which had pretty forgettable work.  An exception I thought was Sangram Majumdar’s show Peel at Steven Harvey.  It had a number of strong paintings that remained firmly within the boundaries of traditional painting.  The fact that they didn’t rely on performance, tedious text or conceptual frameworks, video, sound, carpets, steel girders, and so forth, gave them economy of means and thereby a formally constrained power. All the more laudable in the current context of painting’s much-exaggerated demise. 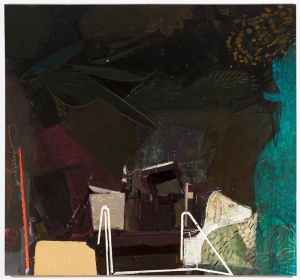 Two final comedy scenes – the one on the right being the queue, in bitterly cold conditions, to see Yayoi Kusama’s installation at Zwirner. 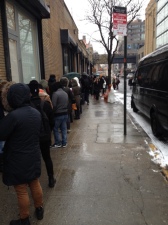