After a week in Paris, I’ve been pretty unmotivated to eat London’s distinctly average and overpriced restaurant food (with some very honourable exceptions). So after a few days of Vietnamese, Khmer, and Thai cooking, I remembered this dish, from Samy’s curry house in Singapore (a less good, but more entertaining, version is served at the Apollo Banana Leaf next to the coolie brothels on Race Course Road). The name “Assam” actually has nothing to do with the Indian state, and rather is the Malay word for “sour” and refers to the tamarind that gives the curry its distinctive sour note. The vegetables and the fish head give the dish a considerable complexity that’s distinct from similar Thai dishes, and also from the antecedent Indian (Bengali and Keralan) fish curries.

Delicious stuff for the summer, and if you have a decent fishmonger, there’s a good chance he’ll have salmon or cod heads going to waste (mine gives them away).

In the event, I used a gurnard and a mackerel, the former for its pretty looks and texture, and the latter because it’s cheap and fantastically fresh in the UK. Take care with the gurnard, it has sharp, hard bones, long painful dorsal and mandibular spines, as well as a sandpaper-like ridge on its skin, none of which soften with cooking and need to be removed carefully from the filets – on balance more trouble than it’s worth. The mackerel was perfect, and if you’re feeling flush, a red mullet would probably be awesome.

Start by putting the fish carcase(s) in a steamer with a little water and lots of sliced or mashed ginger. Steaming the head and bones, with ginger, removes any odd smell (there shouldn’t really be any if the fish are fresh) and effectively makes a stock. Steam for 10 minutes, and retain stock and bones, discarding the ginger.

In a mortar and pestle, grind together the paste (rempah): 4 fresh red chili, 4-5 dried red chili (remove the seeds if you can be bothered), 5 cloves of garlic, 4-5 small Thai shallots (or normal shallots or just a red onion), 2 stalks of lemongrass, 4cm of ginger, 1tbsp of shrimp paste (can find this in Asian supermarkets, I tend to use a less pungent Thai one, but the correct one to use would be belachan, a Malay variety)and a half teaspoon of turmeric powder. I also put in 10 sichuan peppercorns for fun, but they are not part of the canonical recipe, and may not make a big difference.

Heat some oil in a pan (I used mustard but olive or vegetable are fine) on medium heat, and chuck in the rempah, let it fry until fragrant and well-mixed with the oil. At this point, I added a few small pieces of a Bangladeshi vegetable called shatkora, which is a little like a lemon (yet has no juice and is used mainly as a cooking ingredient for the scent in the peel and rind). I also added 2 star anise, 4 cloves, 4-5 kaffir lime leaves, 5-6 curry leaves, and let this all fry for a minute or so, stirring constantly. Add about 2-3 tbsp of curry powder, preferably home-made (recipe here: https://eatthehipster.wordpress.com/2013/01/29/mums-meat-marinate-mix/), and mix everything.

Now add about 60-120ml of light coconut milk (depending on your taste for grease!), wait for the milk to bubble, and then the fish-head stock. Then add some water (depending on how “wet” you want the curry to be), and again let it bubble. Add 5-6 okras, a handful of green beans, 1-2 skinned tomatoes, and a long eggplant (look for the Indian, Chinese, or Thai types, rather than the fat Turkish type which doesn’t seem to cook as well). Add a tiny bit of sugar, and at this point I put in quite a bit of tamarind (having previously soaked the paste in warm water, and strained to remove pips and fibre) juice. The idea is to get a sourness to balance the pungency of the rempah, and richness of the sauce, while in no way overpowering the umami that comes from the fish stock nor adding a particular sweet tone (i.e. this is not a Vietnamese sweet and sour fish soup). I also tend to cut the okras at this point, so that the sticky liquid inside comes out and adds body to the sauce. 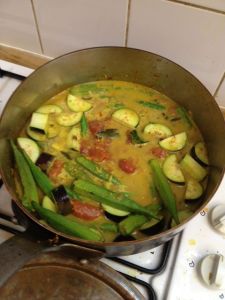 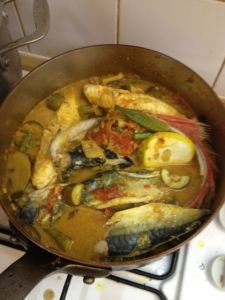 When the vegetables are tender, put in the fish head (if not the bones), and the filets of fish, let it all simmer on a medium-low heat until the fish are done. Let sit for 2-3 hours for the flavours to meld. Serve with white rice. Just mind the eyeballs.