Long gone are the days when Paris meant avant garde in arts and letters. Braque, Picasso, Baudelaire, today, couldn’t afford the drink, and anyway, could never get into the bateau lavoir with the crowd of Montmartre-botherers outside. I’m not sure when the last time was that I saw anyone at the Flore thumbing a lovely Gallimard – all cream-crepe cover and serif red lettering, about some rumination of Agamben or Adorno. Paris is hollowed out, a result of an Anglophone world, the rise in mass tourism, France’s somewhat self-inflicted inability to adapt.

This is reflected in the commercial gallery scene – the majority of art galleries on the Left Bank specialise in conservative, valuable, in most cases utterly lovely, but almost by definition, not risky, art: Asian antiques, Art Deco furniture, prints and drawings by long-dead famous artists. All eminently collectible, and importantly, sellable. There is also quite a lot of tat, stuff that might look good in a sitting room but has zero provenance, as well a great deal of art that is made in and perhaps for the French (or Continental) market, through the system of regional foundations.

But that isn’t to say there isn’t good, internationlly-relevant, contemporary art, as anyone who has been to FIAC, the annual Paris art fair, can attest. In this note, I survey a few spaces worth checking in Paris, in between trendy coffeeshops, natural wine, and Asian-inflected French food.

On a small street just off the Rue de Belleville are a few contemporary galleries, the most exciting of which is Jocelyn Wolff. The show when we visited was a video work by Ulrich Polster, from the former DDR, a single-channel of interleaved images: super-8 home-cinema footage, stills, video, scenes from the former East Germany, and extracts from Eisenstein and Godard. Artistically and formally, I suppose he’s weaving together images whose power derives from cultural connotations (Battleship Potemkin), the now-vintage “look” of super-8 film, the imagery and self-image of the socialist East German utopia, and various architectural shots from Polster’s travels – Saxony, Vienna, the Crimea, and Chernovitz. This last is of particular importance, being a culturally significant Ukrainian city, a centre of Austrio-Hungarian life (a mix of Romanian, Ukrainian, and Jewish traditions), and the birthplace of the poet Paul Celan. He brings to much of the film, a painterly aesthetic: a focus on light, atmosphere, reflections, transmissions, haze, hauntingness. Unlike much video art, this was rapturous, dreamy visuals, with wonderful music. The conceptual element is safely hidden, but available to those who care, and is certainly not a mask for a lack of aesthetic content.

Jocelyn Wolff, significantly, was also one of the champions of the great German artist Franz Erhard Walther, who has in the last few years received deserved recognition (the Pompidou has a new acquisition on view). Very briefly, Walther’s contribution was to do performance art before Performance Art, to bring the viewer in as an active participant in the sculptural space, and to do so in an orchestrated and controlled way, documenting it all in photographs. Oh, and his canvas pieces in particular, are beautifully made. 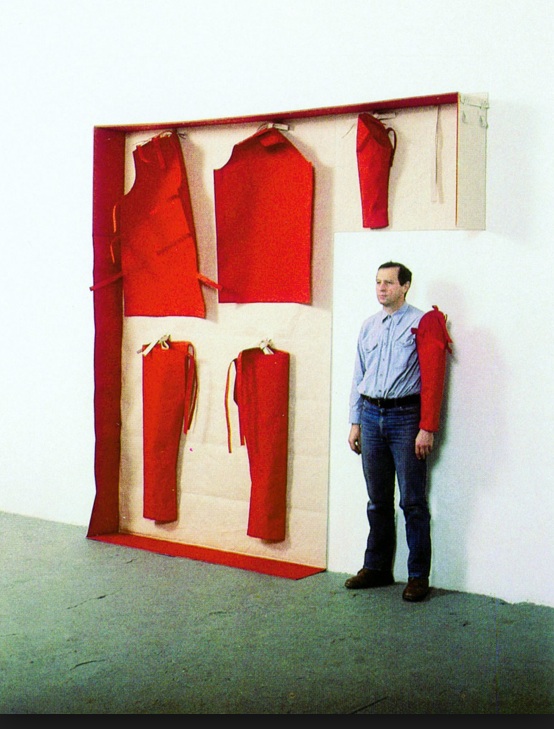 In Bercy, on the Left Bank past the Gare d’Austerlitz, on the ground floor of a (well-to-do) housing estate, is a large black door that opens onto a hangar-like space filled, for this show, with primitive masks and casts of scarified tribal bodies; a great big fibreglass sculpture that looks like a truck engine crossed with a pig’s snout; and a full-size single-family nuclear fallout shelter. The collectors, Steve and Chiara Rosenblum, have juxtaposed masks and objects that have primarily religious, cultural, or shamanistic roots, with contemporary art that, in most cases, can be conceptually or formal linked to the anthropological pieces. Notable items were Matthew Day Jackson’s fallout shelter, Sterling Ruby’s sculpture, Amanda Ross-Ho’s bizarre work that mixes paintings, sculpture, photographs and installations. Their previous show, WYSIWYG, is timely, in retrospect, for showing Wade Guyton just as the Whitney raised him to their pantheon with the retrospective of 2012.

The Julie Mehretu show was interesting – her pieces, ranging from fairly large architectural or urban map drawings/printouts that are then overlayed with acrylic, pencil, and pen, creating an active, unresolved surface that combines figuration and abstraction; to small prints of etchings that are much more about mark-making and erasure, and an investigation of the process of drawing and printing. The larger work is better known, for instance at the Punta della Dogana in Venice, and at the Goldman Sachs building in New York, but the smaller pieces gave some insight as to how she arrives at her (current) “signature style”.

This vast space, ranging over two buildings, had three shows. Probably the most arresting was the Johan Creten show on the ground floor – ceramic sculptures, some anthropomorphic yet having no clear form, almost bodily without being so, others of sinister, watchful owls or griffins. His work takes a somewhat different approach to ceramic sculpture, compared to Lucio Fontana, or Thomas Schutte, while firmly separating it from the pottery and folk-art “ghetto” of popular conception, as well as the (lovely) neo-Modernism of Edmund de Waal.

The other spaces had work with less presence, though two tiny stainless-steel lifts, perhaps 20cm high, good only for moving cups of coffee from floor to floor, were a giggle.

No detailed notes, but worth a visit

Palais de Tokyo: great fun, huge semi-industrial space, in the middle of  uber-posh Paris on Avenue Wilson, that contemporary art, architecture, and a bar/nightclub aesthetic (complete with noisy skateboarders outside). Right next door is the excellent Modern Art Museum of the City of Paris. Currently, there is a show of work inspired by the great French surrealist writer Raymond Roussel, who was revered by Marcel Duchamp, Andre Breton, and Michel Leiris. Roussel’s rather impenetrable book Locus Solus inspired the excellent Japanese anime film Ghost in the Shell 2: Innocence.

Pompidou Centre: skip the gianormous queue for Dali, and go instead to the Eileen Gray show. Great furniture, fabrics, drawings, and an entertaining video of her reflecting on her student days in Soho and at the Slade School. Finish with the permanent collection, always a treat, and lunch on the top floor overlooking Paris.

Pinacotheque de Paris: didn’t go to the Japan-themed show on Van Gogh and Hiroshige, but if the 2012 Giacometti/Etruscan show was a guide, it should be fabulous. The Giacometti show put his sculptures against the context of a large number of Etruscan vessels, sculpture, and objects, many of them from the main Italian collection in Volterra, Tuscany. Importantly, the show had detailed but clear writing in English and French that explained both strains of the exhibition, and also contextualised, within the Existentialist thought current in Paris at the time, Giacometti’s contribution and artistic struggle.