I went to this show with a couple of other artists, and the general consensus was that we need to look at the work in this show in the context of Rae’s other work. For the pieces in this show, taken on their own, seem to amount to less than the sum of their parts. There are undeniably some lovely passages in the paintings, veils of thin colour, almost like glazes, masking other, very different strokes. There are some great swirls, some splashes or splotches, and a forest of curtain-like drips. I loved some of the textural contrasts – vast areas of shine, that then meet somewhat roughened spaces, and all through, elements that are stuck on, that look a little like islands – in many cases, straight lines or dashes, much like moles outside the harbour. An element that attracted comment, both amongst ourselves and the press release, are the hideous Chinese embroidered pandas that are collaged onto the painting.

Looking at the works on their own, I would say they appear to be an exercise in virtuoso effects, as if someone had just discovered all these tricks that could be done with paint, and then went on to make tapestries of effects, some of which are quite successful, but en masse, amount perhaps to a cacophony. As one of my companions said, “she looks like she’s having too much fun”. Which is perhaps where a certain type of art is today, having discarded the austerity of high Modernism, the substantial physical presence of Minimalism, the sheer novelty of Pop, and the utter boredom of Land Art; maybe these days, the best that can be hoped for is a symphony of painterly effects that make one smile, but neither engender a feeling of awe, nor force one to think seriously about the work.

That’s the impression on walking in and seeing the show.

It is almost certainly too harsh. While this particular show may not be to everyone’s taste, a broader consideration of Rae’s output shows an impressive ability to generate “painterly effects”, which while individually perhaps twee and child-like, are, as a body of work, rich in their manipulation of paint, colour, figure, and pictorial space. In a sense, she creates a world on the canvas of swirls, splotches, circles, lines, squares, smudges, etc. – in short, everything a painter works with – and manipulates it repeatedly, yet with a degree of variety, which demands respect, within the narrow confines of “what constitutes a good painting”, even if one doesn’t actually want it on one’s wall. 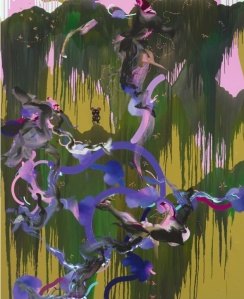